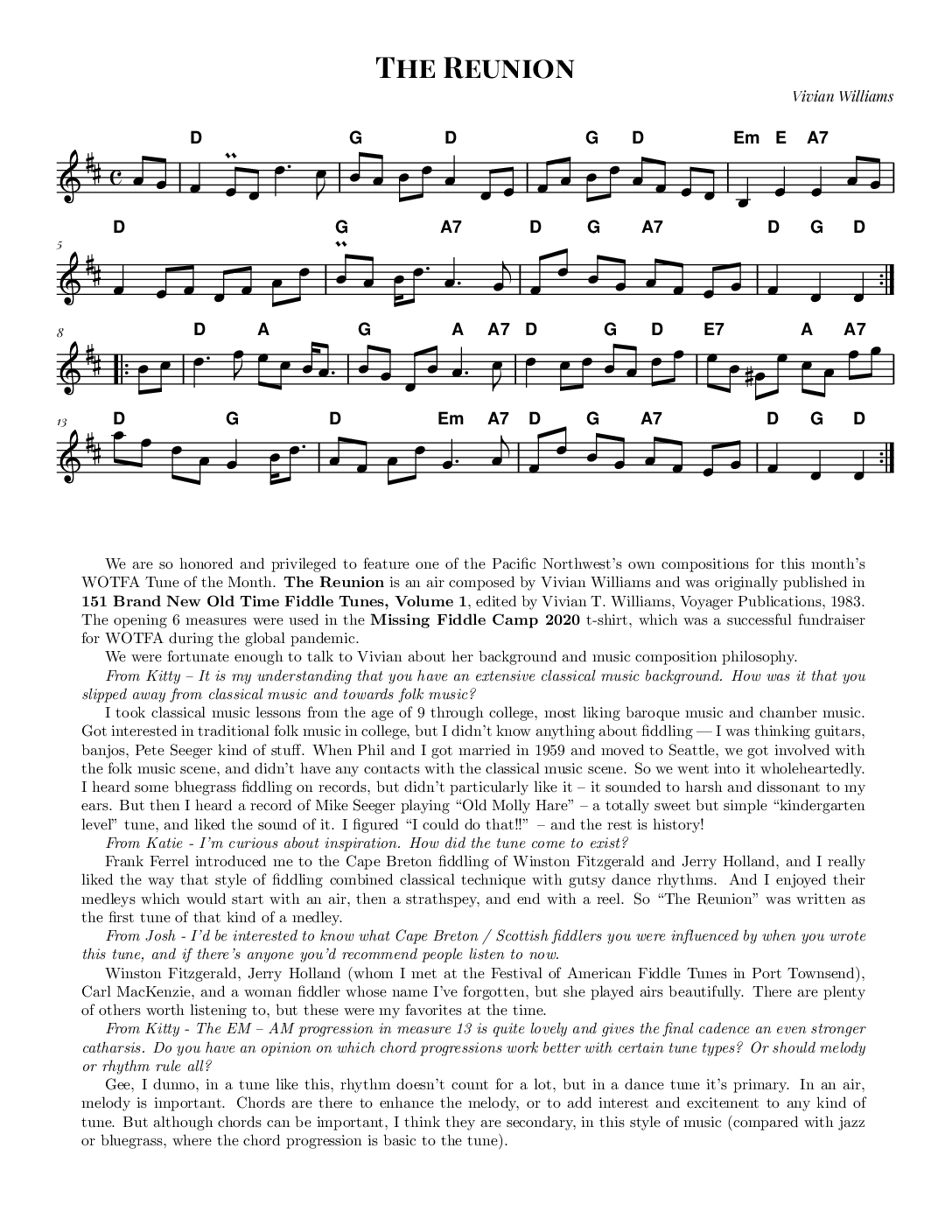 We are so honored and privileged to feature one of the Pacific Northwest’s own compositions for this month’s WOTFA Tune of the Month. The Reunion is an air composed by Vivian Williams and was originally published in 151 Brand New Old Time Fiddle Tunes, Volume 1, edited by Vivian T. Williams, Voyager Publications, 1983. The opening 6 measures were used in the Missing Fiddle Camp 2020 t-shirt, which was a successful fundraiser for WOTFA during the global pandemic.

We were fortunate enough to talk to Vivian about her background and music composition philosophy.

I took classical music lessons from the age of 9 through college, most liking baroque music and chamber music. Got interested in traditional folk music in college, but I didn’t know anything about fiddling — I was thinking guitars, banjos, Pete Seeger kind of stuff. When Phil and I got married in 1959 and moved to Seattle, we got involved with the folk music scene, and didn’t have any contacts with the classical music scene. So we went into it wholeheartedly. I heard some bluegrass fiddling on records, but didn’t particularly like it — it sounded to harsh and dissonant to my ears. But then I heard a record of Mike Seeger playing “Old Molly Hare” — a totally sweet but simple “kindergarten level” tune, and liked the sound of it. I figured “I could do that!!” — and the rest is history!

From Katie – I’m curious about inspiration. How did the tune come to exist?

Frank Ferrel introduced me to the Cape Breton fiddling of Winston Fitzgerald and Jerry Holland, and I really liked the way that style of fiddling combined classical technique with gutsy dance rhythms. And I enjoyed their medleys which would start with an air, then a strathspey, and end with a reel. So “The Reunion” was written as the first tune of that kind of a medley.

From Josh – I’d be interested to know what Cape Breton / Scottish fiddlers you were influenced by when you wrote this tune, and if there’s anyone you’d recommend people listen to now.

Winston Fitzgerald, Jerry Holland (whom I met at the Festival of American Fiddle Tunes in Port Townsend), Carl MacKenzie, and a woman fiddler whose name I’ve forgotten, but she played airs beautifully. There are plenty of others worth listening to, but these were my favorites at the time.

From Kitty – The EM – AM progression in measure 13 is quite lovely and gives the final cadence an even stronger catharsis. Do you have an opinion on which chord progressions work better with certain tune types? Or should melody or rhythm rule all?

Gee, I dunno, in a tune like this, rhythm doesn’t count for a lot, but in a dance tune it’s primary. In an air, melody is important. Chords are there to enhance the melody, or to add interest and excitement to any kind of tune. But although chords can be important, I think they are secondary, in this style of music (compared with jazz or bluegrass, where the chord progression is basic to the tune).