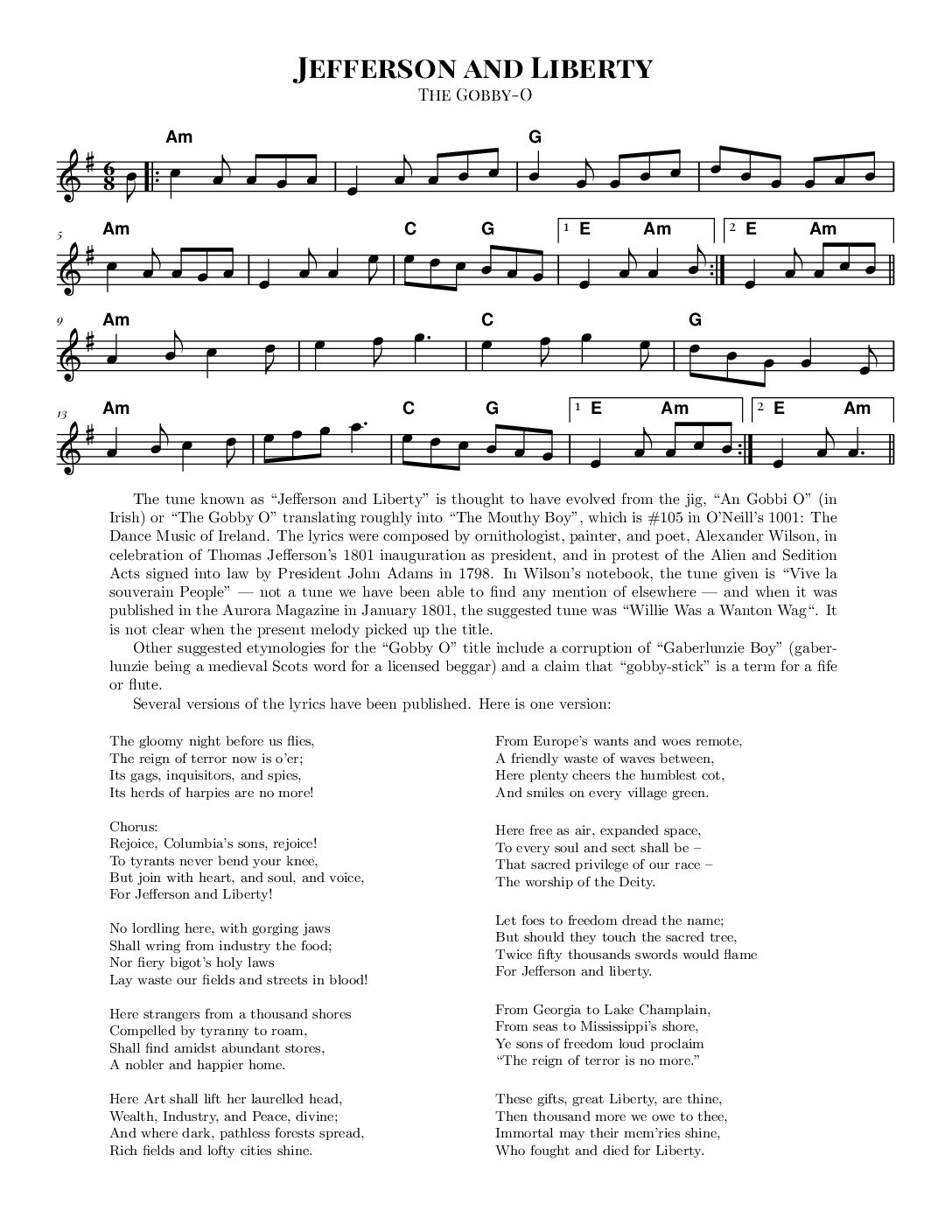 The tune known as “Jefferson and Liberty” is thought to have evolved from the jig, ‘An Gobbi O’ (in Irish) or ‘The Gobby O’ translating roughly into ‘The Mouthy Boy’, which is #105 in O’Neill’s 1001: The Dance Music of Ireland. The lyrics were composed by ornithologist, painter, and poet, Alexander Wilson, in celebration of Thomas Jefferson’s 1801 inauguration as president, and in protest of the Alien and Sedition Acts signed into law by President John Adams in 1798. In Wilson’s notebook, the tune given is “Vive la souverain People” — not a tune we have been able to find any mention of elsewhere — and when it was published in the Aurora Magazine in January 1801, the suggested tune was “Willie Was a Wanton Wag“. It is not clear when the present melody picked up the title.

Other suggested etymologies for the “Gobby O” title include a corruption of “Gaberlunzie Boy” (gaberlunzie being a medieval Scots word for a licensed beggar) and a claim that “gobby-stick” is a term for a fife or flute.

Several versions of the lyrics have been published. Here is one version:

The gloomy night before us flies,
The reign of terror now is o’er;
Its gags, inquisitors, and spies,
Its herds of harpies are no more!Chorus:
Rejoice, Columbia’s sons, rejoice!
To tyrants never bend your knee,
But join with heart, and soul, and voice,
For Jefferson and Liberty!No lordling here, with gorging jaws
Shall wring from industry the food;
Nor fiery bigot’s holy laws
Lay waste our fields and streets in blood!Here strangers from a thousand shores
Compelled by tyranny to roam,
Shall find amidst abundant stores,
A nobler and happier home.Here Art shall lift her laurelled head,
Wealth, Industry, and Peace, divine;
And where dark, pathless forests spread,
Rich fields and lofty cities shine.
From Europe’s wants and woes remote,
A friendly waste of waves between,
Here plenty cheers the humblest cot,
And smiles on every village green.Here free as air, expanded space,
To every soul and sect shall be —
That sacred privilege of our race —
The worship of the Deity.Let foes to freedom dread the name;
But should they touch the sacred tree,
Twice fifty thousands swords would flame
For Jefferson and liberty.From Georgia to Lake Champlain,
From seas to Mississippi’s shore,
Ye sons of freedom loud proclaim
“The reign of terror is no more.”These gifts, great Liberty, are thine,
Then thousand more we owe to thee,
Immortal may their mem’ries shine,
Who fought and died for Liberty.
Download Score