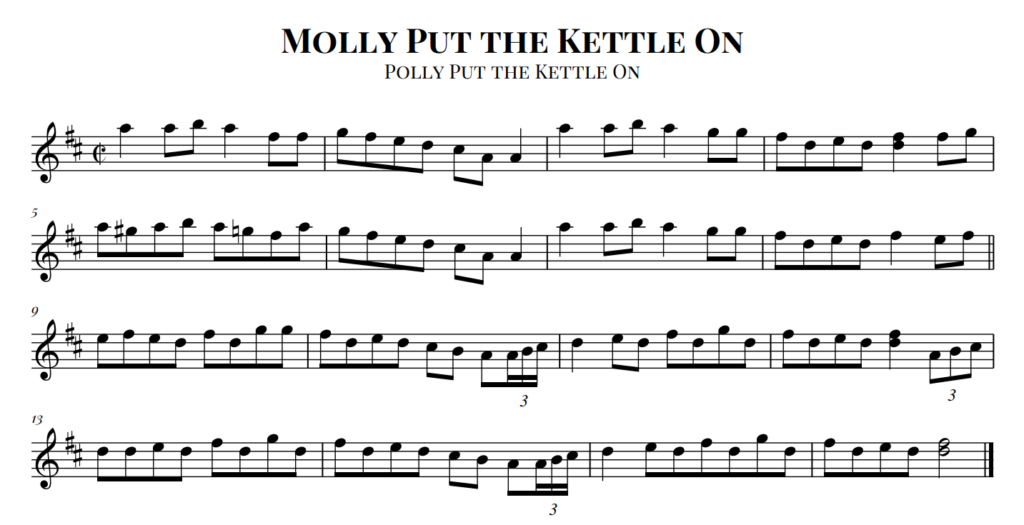 Polly Put the Kettle On (Molly Put the Kettle On) is a Mother Goose children’s rhyme. The `modern’ Mother Goose dates back to the early 18th century when Charles Perrault’s fairy tale collection, Contes de ma Mère l’Oye was translated into English as Tales of My Mother Goose. Like the Germanic Brothers Grimm stories, Mother Goose tales were taken from oral tradition and traces of the stories can be found in early 17th century French literature. Mother Goose tales are also loosely linked to such historical figures as the wife of King Robert II of France, known as Berthe pied d’oie (Goose-Footed Bertha), Charlemagne’s mother Bertrade of Laon, regina pede aucae (the goose-foot queen), and even the biblical Queen of Sheba.[1]https://en.wikipedia.org/wiki/Mother_Goose

The nursery rhyme is mentioned in Charles Dickens’ Barnaby Rudge (1841) which takes place during the Gordon Riots of 1780.[3]The Gordon Riots were riots in London, June 2–9, 1780, in response to the passing of the Papist Act of 1778. This act was intended to officially reduce discrimination against British Catholics … Continue reading

The children’s nursery rhyme most likely heard today:[4]As sung by my mother.