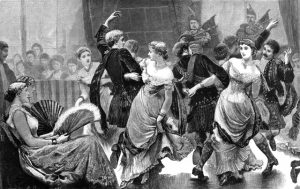 Elijah Harper’s Reel is another fine composition by John Arcand (See the Evergreen Fiddler Tunebook– Vol. II) and one that Jamie played the other night. Elijah Harper was a chief of the Red Sucker Lake Band and served on both the Manitoba legislature and the Canadian House of Commons. He is remembered for putting a halt to an attempt at constitutional reform known as the Meech Lake Accord. I first learned this tune when Mabel Vogt taught it at the WOTFA fiddle camp a few years back and have enjoyed it ever since.
Jamie Fox plays the Métis, Canadian and Northwestern fiddle music of the Belknap Reservation in Montana where she was raised. She has learned from many of the Métis fiddlers in the surrounding area and on up into Canada, including John Arcand. The Fox Family, with Jamie’s father and brother, has toured widely and released a CD called ‘Fox Family Fiddle – Métis tunes from Montana’ (www.sweetgrassmusic.com). Her playing has a warmth and playfulness that I have long admired and I think you will too. She currently serves in the Air Force at Joint Fort Lewis/McChord, keeping the planes in tip top shape, and can be heard locally at contra dances and fiddle shows.
Stuart Williams