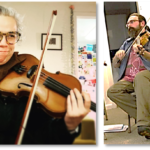 Folk music and music history is a passion for our new team of music editors.  I would like to introduce you to Kitty Steetle and Josh Larios.

Both Josh and Kitty started their musical lives by playing the clarinet in grade school.  They also both have worked with a plethora of other instruments from harmonica and didgeridoo (Josh) to oboe and vielle (Kitty).  Although Josh started playing violin in his Junior high school orchestra, Kitty found the fiddle when she was twenty-one, and now calls it “by far the most fun … because of the kinetic element of moving your arms and feeling the vibration in your bones.”

Josh and his family have deep pacific northwest roots, and he has lived in Seattle for a most of his life.  Kitty moved here about 8 years ago.

I asked them each “How did you end up in the Folk community?”  Here are their responses:

Kitty: My Mom’s favorite story of me is that during my early childhood we lived in a very Irish/Scottish area of Massachusetts. I had a hearing disorder that caused me to be in speech therapy starting when I was 2. We used to go to a lot of cultural festivals and when I was about 3 I wandered away from my parents. My Mom found me standing right next to some highland pipers because as my mother tells me, ‘It was the only thing you could hear.’  In Massachusetts Irish/Scottish folk music was everywhere and I think it ended up saturating my soul.

My parents are from the deep south so I also grew up on Old Time, Bluegrass, and what my Dad calls, ‘nasal twang’. Most summers we ended up in Alabama, surrounded by country music and listening to my Granddaddy play old time tunes on his fiddle (not very well, bless his heart) while sitting on his la-z-boy. This coupled with Prairie Home Companion every Saturday night ‘done did me in’ for Old Time and Bluegrass.

I finally picked up the fiddle because I inherited it from my Granddaddy just in time to join an Irish Music class during college. From Irish/Scottish music I got into contradance music and then into playing Old Time. Perhaps because of this Old World/New World combination, I love finding out a tune’s history and how/if they have changed. I think that the history of folk music is the history of the people. And who doesn’t want to find out their history?

Josh: In 2012 after attending a “slow jam” at Folklife that was in no way “slow”, my wife and I started the Slower Than Dirt jam session, which has been running monthly in meeting rooms at Seattle Public Library branches (and, more recently, virtually on Zoom) ever since. I had gone to the Festival of American Fiddle Tunes a couple of times when I was a teenager, so I’d been exposed to the community before, and I blend in easily now that I wear plaid wool shirts and have a beard. I don’t know that there’s any single “folk community” that I’m more a part of; I feel like I’m kind of on the edges of a few different folk communities.

I also asked each one, “What is your current favorite tune, and why?”  Both answered with the same initial response:

Josh: Oh, that’s a tough question. Lately, the tune I’ve been playing to get warmed up is Belle of Lexington, from the playing of Emmett Lundy of Galax, Virginia. (There’s a great video of Riley Calcagno and Vivian Leva playing it at https://youtu.be/1fsazB5b4X4 which is mostly what I learned it from.) It’s got a lot of movement in the melody without being overly complicated, is equally interesting in both the high and low parts, and lends itself well to the kinds of techniques and variations I’m trying to immerse myself in right now. Plus it sounds good with “Missouri Rules” changes on the guitar, which is about the only pattern I can reliably remember as a beginning guitar player, so eventually I’ll probably be able to record myself on lead and backup. Ask me again in a few weeks and the answer might be a Swedish polska, though; I’ve been listening to more Scandinavian music recently.

Kitty: This question is SO HARD. It changes daily if not weekly. Since Monday I’ve been obsessed with this Faroe Islands duo – Raske Drenge. Couple weeks ago I was all about Bronwyn Keith-Hynes’s album, Fiddler’s Pastime.

To play – I like ‘happy tunes’ (like Cuckoo’s Nest), tunes that you can really lean into (Elzic’s Farewell), and tunes you can play with the tonality (Greasy Coat).

If I had to pick one to play – I’ll go with Sally Ann. I love how the tune starts so intensely on the high A, then has these longer notes that you can either choose to float on, or if you’re feeling cheeky, you can lean into the dissonance making it crunchier. 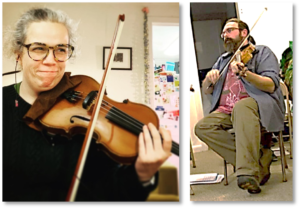 You can usually catch Josh leading various jam sessions at local folk festivals, or check out his resources on https://slowerthandirt.org/. Look for Kitty’s fiddle tunes on Instagram at @letsgetfolked (https://www.instagram.com/letsgetfolked/)